HMD Global is on launch spree. After unveiling numerous smartphones in India and across the globe this year, the company is set to host a launch event, where it will be unveiling three smartphones in Dubai on December 5.

Juho Sarvikas, the Company’s Chief Product Officer confirmed the event with a vent teaser along with the caption #ExpectMore, where it shows off as many as three smartphones side panels. Reports reveal that the three smartphones to be launched include Nokia 2.1 Plus, Nokia 8.1 and the flagship Nokia 9. Also it reveals that the smartphones on left and center sporting a notched display but the one on the right don’t. 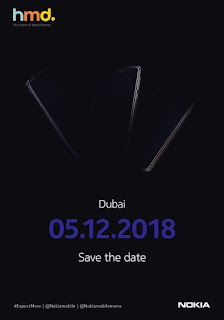 The Nokia 8.1 and Nokia 2.1 Plus will arrive with a notched display, where the former is in the upper mid-range smartphone and the latter is regarded as entry level device. The Nokia 8.1 boasts of dual rear cameras with ZEISS lens and is likely to be unveiled in India on 28th November. Though named Nokia 8.1, it is the rebranded version of the Nokia X7 earlier launched in China……..Read More>>

1
Link Aadhaar with your mobile is important for Covid Vaccination

6
BSNL 29 and. 9 plans with Unlimited Calls, Data for this ID Day

1
Link Aadhaar with your mobile is important for Covid Vaccination

2
New H1B Wage Rule – How it works and effects