NEW DELHI: As on September 30, 2017, more than Rs 1.1 lakh crore was owed to banks by people or companies characterised as “wilful defaulters”, that is those who are unwilling to pay despite having the capacity to do so. TOI analysed more than 9,000 such accounts for which banks have filed lawsuits for recovery and found that the top 11 debtor groups, each with dues of over Rs 1,000 crore, together had over Rs 26,000 crore outstanding to the banks.

Analysis of the publically available data for suit-filed accounts (wilful defaulters) of Rs 25 lakh and above shows that Jatin Mehta-promoted Winsome Diamonds & Jewellery Ltd and Forever Precious Jewellery & Diamonds Ltd owed close to Rs 5,500 crore to various banks. Mehta is reported to be now a citizen of St Kitts and Nevis, a tax haven with which India doesn’t have an extradition treaty. 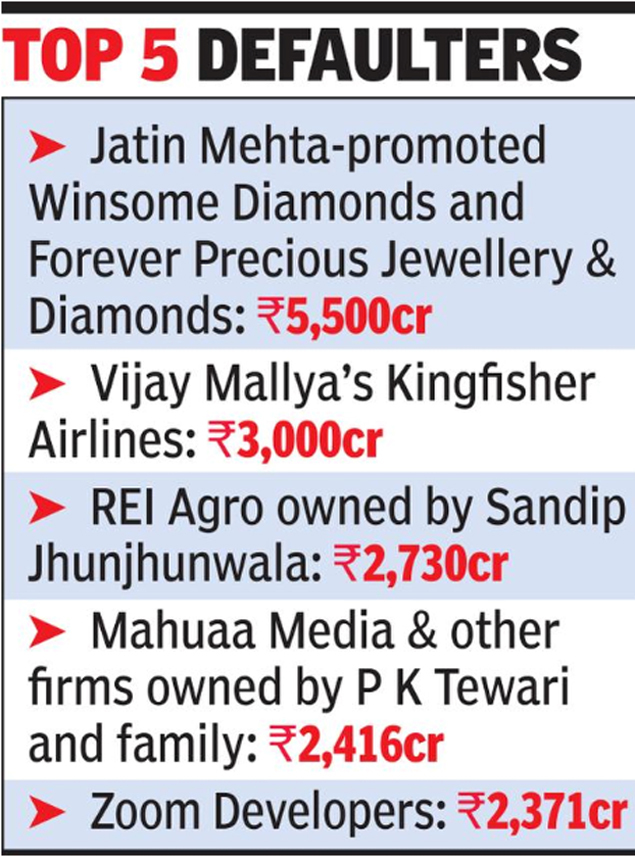 Mehta’s companies are followed by Vijay Mallya’s Kingfisher Airlines, which has to pay back over Rs 3,000 crore under this head. The third company in the list is Kolkata-based REI Agro, a company owned by Sandip Jhunjhunwala, which, according to news reports, was once listed in London and Singapore stock exchanges and was co-sponsor of an IPL team. This company owes Rs 2,730 crore. Next in the list are the companies owned by Prabodh Kumar Tewari and his family members. The amount outstanding on Mahuaa Media, Pearl Studio Pvt. Ltd, Century Communication and Pixion Media Pvt Ltd is Rs 2,416 crore. 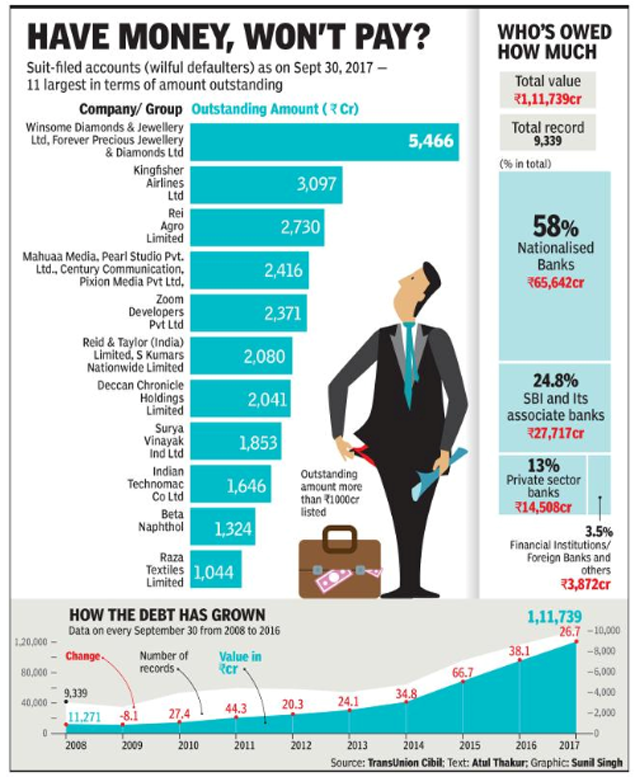 The other companies that owe more than Rs 2,000 crore and are unwilling to pay despite having the means, according to the banks, are Zoom Developers Pvt Ltd promoted by Vijay Choudhary, Reid & Taylor (India) Limited & S Kumars Nationwide Limited, both promoted by Nitin Kasliwal, and media baron T Venkatram Reddy’s Deccan Chronicle Holdings Limited.

The data shows the alarming rate at which these bad loans are growing. In the past one year it has increased by about 27%. In the previous three years, it had increased by 38%, 67% and 35%, respectively. Thus, between September 2013 and September 2017, the amount has quadrupled from Rs 28,417 crore to over Rs 1.1 lakh crore. While some of this would be due to interest being added each year, the quantum of the increase is too large to be entirely or even mainly due to that.

RBI defines “wilful default” as defaults done despite the borrowers’ paying capacity. Money diverted for purposes other than the specific purpose of finance, or siphoned off and hence not available as assets to the borrower also qualifies as wilful default. Borrowers who have sold fixed assets that they provided as collateral to secure the loan without informing the bank also come under this category.

The cumulative total of more than 50 companies or groups each with over Rs 250 crore of wilful default works out to about Rs 48,000 crore. To put that in perspective, it is only slightly less than the government’s allocation of Rs 52,800 crore for health in the 2018-19 Budget.

Bank-wise analysis of the data shows that nationalised banks (excluding SBI and associates) constitute about 60% of this money. SBI and its associates account for one-fourth of the total. Private sector banks have also declared over Rs 14,000 crore as wilful defaults.

3
Microsoft, Amazon Miss Deadline to Bring Cortana and Alexa Together

6
No Plan At Present To Have All Electric Car Fleet By 2030: Government

8
Jio vs Airtel: Prepaid and Postpaid Plans With More Than 2GB Data Per Day

2
Google Pay will not Charge Transaction Fees in India

3
Now, receive unlimited payments through Paytm Wallet without any fee

5
Changes In Motor Vehicle Rules You Should Know

6
How To Enable The Disappearing Messages Feature On Whatsapp